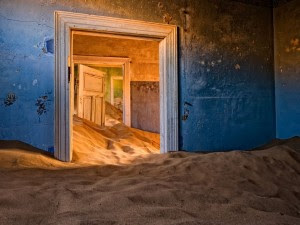 Imagine someone you never met came to visit you and you offered to let him or her crash on the couch because they had some cool stuff they were willing to trade. After a few days they tell you that the couch bothered their back and they needed to use your bed. You let them with the understanding that once their back is feeling better they’d be back on the couch and in the mean time you would get to use their cool stuff.  The guest then tells you that the floorboard heat is inefficient, your wallpaper and carpet doesn’t match and insists that a big screen TV and a DVD player are much better than your old VHS and 21” model. You agree but claim you are comfortable with the way things are.

Your benevolent guest says no problem -- it’s on them.

Your guest has a group of people come and help with the free renovations. As the place fills up with plumbers, electricians and carpenters you give up the couch and move into the bathroom and make a cozy bed in the bathtub. I mean, it’s the least you could do after all the improvements this guest is providing. The gracious guest then offers to install a shower, replace your electric range with gas and remodel your kitchen cabinets. More people move in to assist with the renovations and you end up sleeping by the back door next to the kitty litter.

Once the place is completely renovated you go to use the new shower. Your guest stops you saying that the people that did the work should get first crack at it. By the time everyone is done you are left with no hot water. You try to get your bed back but are told you have a lot of nerve after all the work they did. At the end of the day you’re allowed only the corner of the house next to the kitty litter – as long as you don’t interfere with the operation of this efficient remodelled house and the people who now occupy it. You can still use the cool stuff but now you have to pay rent for it.

Now imagine that your great great grandchildren are still sleeping next to the kitty litter and taking cold showers.

The First Nations people in Canada have been taking cold showers next to the kitty litter for over a hundred and fifty years. The land has been subjected to industrial, agricultural and urban “improvements” to the point that they are no longer able to occupy it in the way they did in comfort before.

Thanks for stopping for a visit. You comments are appreciated.

The Headstones – "Long Way To Neverland" set to a "silent" 1916 Western from Bernard Dukas on Vimeo.